The SSB interview consists of 2 stages i.e. stage I and stage II. The stage (I) can include Officer Intelligence Rating (OIR) and Picture Perception & Description Test (PP & DT). The stage (II) can include Interview, Group Testing Officer Tasks, Psychology Tests and also the Conference. These tests are organized over four or five days. The complete method can carry 900 marks. Here you may get complete info regarding SSB Interview Dates, SSB Interview Tips, SSB Interview Procedure, etc. The SSB Interview Procedure contains 2 stage selection process Stage I & Stage II. Candidates, those qualify the Stage I, solely they’re permitted to appear for Stage II. The whole procedure is given below:
Stage 1: This stage consists of Officer Intelligence Rating (OIR) Tests and Picture Perception & Description Test (PP & DT). Stage one could be a Screening Test. Candidates are shortlisted on the premise of combined performance in the OIR Test and PP & DT.
Stage 2: This stage is held for days. Stage II consists of Psychology Tests, Group Testing Officer Tasks (GTO Tasks), Interview & Conference.

On this present day, candidates need to report to the selection center. The candidate’s original documents together with photocopies are verified. After the documents verification, Personal Information Questionnaire (PIQ) Forms are filled.
PIQ Forms: During this type, candidates need to fill their personal details relating to educational profile, family background, etc. This manner is incredibly necessary. The responses are analyzed by the psychologist of the Board.

On a subsequent day, it’s Stage one. Candidates need to provide an intelligence test (Verbal & Non-Verbal) Perception Test. In the PP test, slide (hazy or clear) is shown for thirty seconds & candidates need to write the story. After finishing this test, the conference round takes place. This sequence is often referred to as the image Perception and Discussion Test (PPDT).
Intelligence Test: It contains both; verbal and non-verbal queries. It’s a written test that has multiple-choice queries. The time assigned to answering every question is thirty seconds.
Picture Perception and Discussion Test (PP & DT): This Test includes story writing and discussion. An image is shown to the candidates for thirty seconds and candidates need to write a story based on the image in three minutes.

These Tests are interactive indoor and outdoor activities as a mixture of mental and physical work. These tests are as follows:
Group Discussion: During this round, a certain situation or topic (mostly current affairs) is given to a group of candidates. They’re expected to discuss the varied aspects of the difficulty. Group Task Officer observes every candidate throughout the course of the group discussion.
Group Planning Exercise (Military Planning Exercise): During this round, a model of real-life practical circumstances are presented to a group of candidates. They need to write down their own plan of action for the mentioned problem.
Progressive Group Tasks (PGT): During this round, the group of candidates has got to cross some obstacles with the help of supporting materials like rope, plank, wood log, etc.
Half Group Tasks: This round is the same as PGT however the numbers of group members can half. Candidates get a lot of chances to show their potential.
Individual Obstacles: During this round, candidates are needed to attempt ten obstacles one by one.
Group Obstacles Race or Snake Race: During this round, all group members will compete with the opposite teams. Candidates are needed to cross certain obstacles with the snake-like rope.
Command Task: During this task, an aspirant is a commander. He will be needed to cross some obstacles with the help of 2-3 subordinates.
Lecturette: During this round, every individual has got to give a lecture for three minutes on a subject chosen by them.
Final Group Task: It’s the same as PGT. Candidates have another probability to point out their potential.
On the same day, the candidate’s interview is conducted. It involves a private conversation with Interviewing Officers.

ALSO READ: WHAT IS SSB

On the final day, candidates & all the SSB members sit along and have a talk to the candidates to ask a number of general queries. The conference is simply to determine whether or not you recommend as an official in Indian defense forces or not. Candidates are needed to come before the entire Board of Examiners, which consists of President, Deputy President, all the GTOs, all the psychologists, and Technical Officer. Within an hour, the SSB result are declared after completion of the board meeting. Selected candidates undergo a medical test for more three or five days. After qualifying the candidate’s medical test, the final merit list is declared. 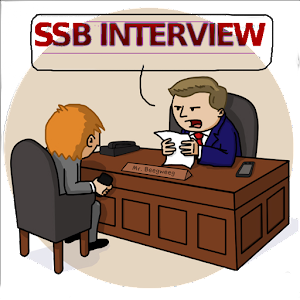 Q1.) Why do you wish to join Defense Forces?
Q2.) What if you do not get counseled this time?
Q3.) Do you have a boyfriend/girlfriend?
Q4.) What is your belief in marriage? (Love/Arranged)
Q5.) Do you drink/booze?
Q6.) Why did you fail in the previous SSB attempt (for repeaters)?
Q7.) Did you do any special preparation for SSB?