Group Captain Perminder Antil (26686) Flying (Pilot) is the commanding officer of a Su-30 MKI Squadron since January 2020. On 21 September 2020, during a sortie from the front cockpit of a Su-30 aircraft, he experienced unprecedented and vicious oscillations within the longitudinal and lateral planes with gravitational forces rapidly varying from +9G to -1.5G, including the aircraft uncontrollably banking to the left and other control failure indications. Overcoming ‘black-out’ conditions encountered due to the extremely high ‘G’ conditions, he manually dampened the aircraft oscillations and also checked the safety of his weapon system operator. 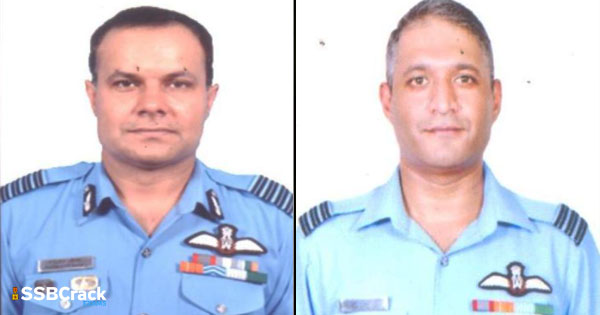 While controlling the aircraft, he turned away from populated area to make sure no loss of civilian life or property just in case of a probable ejection. As he initiated a priority recovery, the aircraft once more encountered vicious oscillations, with the control of the aircraft requiring large amount of pressures on the control column by the pilot. The officer applied his superior systems knowledge and opted for a few unconventional recovery actions.

As a results of his judgement and skilful handling, the oscillations reduced and also the aircraft was recovered safely. During these life-threatening circumstances, the pilot maintained his composure, displayed exemplary courage and maintained his presence of mind. His superior piloting skills ensured safety of a national asset worth hundreds of crores of Rupees and precluded possible damage to life and property on ground just in case of an ejection.

For this act of exceptional gallantry, exemplary standards of professionalism and contribution to aerospace safety, captain Perminder Antil has been conferred with the Shaurya Chakra.

Wing Commander Varun Singh (27987) Flying (Pilot) may be a pilot during a Light Combat Aircraft (LCA) Squadron. On 12 Oct 20, he was flying a system check sortie in LCA, away from parent base, after major rectification of flight control System (FCS) and pressurisation system (life support environment control system).

During the sortie, the cockpit pressurisation failed at high altitude. He correctly identified the failure and initiated a descent to lower altitude for landing. While descending, the control System failed and led to total loss of control of the aircraft. This was an unprecedented catastrophic failure that had never occurred.

There was a rapid loss of altitude while in usual attitude, with the aircraft pitching up and down viciously going to the extremities of G limits. Despite being in extreme physical and mental stress in an extreme life-threatening situation, he maintained exemplary composure and regained control of the aircraft, thereby exhibiting exceptional flying skill. Soon thereafter, at about 10,000 feet, the aircraft again experienced total loss of control with vicious manoeuvring and uncontrollable pitching. Under such a scenario, the pilot was at liberty to abandon aircraft.

Faced with a possible hazard to his own life, he displayed extraordinary courage and skill to securely land the fighter aircraft. The pilot went beyond the decision of duty and landed the aircraft taking calculated risks. This allowed an accurate analysis of the fault on the indigenously designed fighter and further institution of preventive measures against recurrence. due to his high order of professionalism, composure and quick deciding , even at the peril to his life, he not only averted the loss of an LCA, but also safeguarded civilian property and population on ground.

For this act of exceptional gallantry, Wg Cdr Varun Singh is conferred with the Shaurya Chakra.